What is a Thermocouple? 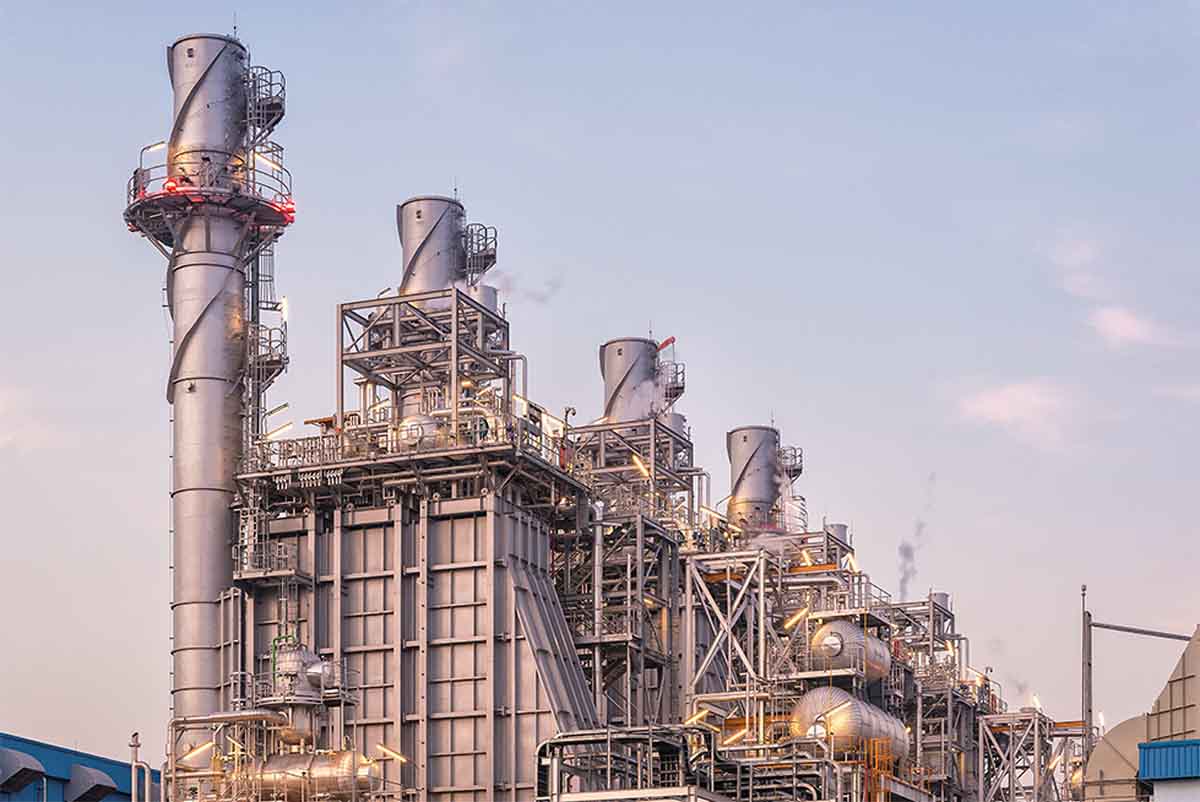 What is a thermocouple? In order to understand thermocouples, one must first begin with a discussion of metals. Many of us are familiar with such metals as copper, iron, and aluminum. We are familiar with these metals because we use them every day, i.e. copper wires in wiring electrical connections, copper tubing in plumbing applications, iron pipes, aluminum pots and pans, frames, etc.

Now let’s discuss some additional metals which most of us may not be familiar with i.e. chromel, constantan, alumel, and platinum. Assume that we have wires made of these different materials.

Thermocouple manufacturers and users are very familiar with these wires, because these wires are used for measuring temperature. So how does this work and what is a thermocouple used for? We will now answer these questions.

Let us do an experiment. Choose any two different types of wire from the ones mentioned above, or any other kind of wire that you know of. For simplicity, let us call one of the wires, wire A and the second wire, wire B. Now, attach these two wires by twisting their ends together, see Figure 1.

You can perform this experiment with any two wire thermocouple as long as it is they are made of two different metals. See Figure 2.

Now, very simply we can say that when two dissimilar metal wires are joined at both ends, a current will be produced provided that the junctions are at different temperatures.

The current produced is a function of the junction’s temperature, and the types of metal used. How does a thermocouple work? Let us take a look at Figure 3.

The thermocouple circuit, as shown in Figure 3, is widely used for the measurement of temperature. We measure voltages rather than current because the EMF depends only on materials and temperature, whereas current would be influenced by many factors that determine the resistance of the entire circuit.

temperature, whereas current would be influenced by many factors that determine the resistance of the entire circuit.

What is the difference between copper wire and thermocouple wire types?

We can say thermocouple wiring differs from electrical wire in that:

1. Thermocouple wires are wires that use various alloy combinations while the conductors in electrical wire are usually copper.

3. Thermocouple wire is used to measure temperature. Electrical wire can be used to carry

There are relatively few alloys that have been standardized for use as a successful thermocouple wires. Each alloy wire has a name, and special usage. Alloy wire pairs (or couples) are referred to by a code letter.

We said that a measuring junction (hot end) is constructed by joining the ends of two dissimilar conductors. After connecting the opposite ends (cold end) to an instrument, a thermocouple circuit is established. See Figure 3 again. This is very simple, so that everybody can build a thermocouple and measure temperature.

That is true, but there is a catch to it. What is this catch?

Remember we said that a thermocouple is a device that converts thermal energy directly into electrical voltage when dissimilar metal wires are connected and heated. In terms of practical application, the joined end is associated with the hot area, the temperature which we want to measure, and the opposite or free end is connected to a device (instrument): a voltmeter that reads millivolts generated by the hot junction. That is to say, for every temperature point of the “Hot Area” there is an associated millivolt reading.

Place the twisted end inside the boiling water with the reference (cold junction) at room temperature and connect the free ends to the terminals of the voltmeter. The voltmeter indicates 0.545 millivolts which represents 212 degrees Fahrenheit (100 degrees Celsius).

In this case, our experiment is over simplified, because everybody knows that the boiling point of water is 212 degrees Fahrenheit. Now what would happen if you wanted to measure the temperature of a boiling oil or a gummy hot plastic or a hot pipe?

By placing the twisted end (hot end) inside the hot service or by touching it, the voltmeter will show a number in terms of millivolts – but what temperature will this millivolt reading represent? I would say, “Who knows?” So what good is this reading? Therefore, the thermocouple that we made of wires A and B is useless. Now we can say, unless we use two wires known to industry, our thermocouple has no use.

Insulation is an electrically non-conductive material used to prevent the leakage of electricity from conductor wires. Every insulation material has its own temperature limitation (as well as voltage resistance). The temperature rating of an insulator is the maximum temperature at which the insulation material may be used in continuous operation without the loss of its basic properties.

The names of some widely used insulations are: nylon, ceramic, teflon*, fiberglass, high-temp glass, and PVC. A word of caution here is to choose the thermocouple insulation material carefully when the system must measure high temperatures. Also other effects of the environment on the insulation must be considered. For example, to protect the insulation from liquids and harsh atmospheres a metallic sheath (tube) must be used, see Figure 5. 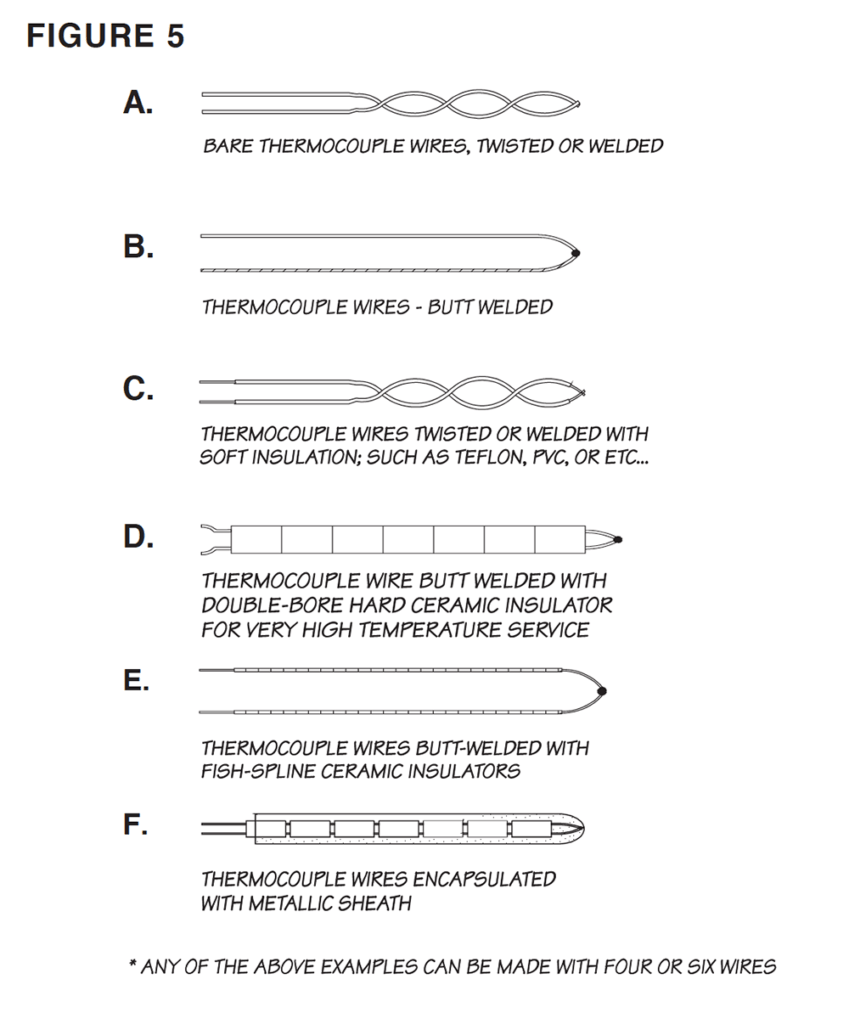 Extension wire is quite likely to receive mechanical stress, such as when it is pulled through conduits. There should be sufficient protection (i.e. metal protection) against

mechanical abuse as well as some consideration to minimize temperature gradient across these wires.

“Temperature gradient” mentioned above, is especially true of the junctions formed between the thermocouple and extension wires.

While on the subject, let us briefly mention that whether a thermocouple is far from the measuring circuitry (hot point) or close to it, noise can cause errors in critical applications. We will have some discussion later on noise reduction methods which will provide a good starting point for a carefully constructed system. See Figure 6. 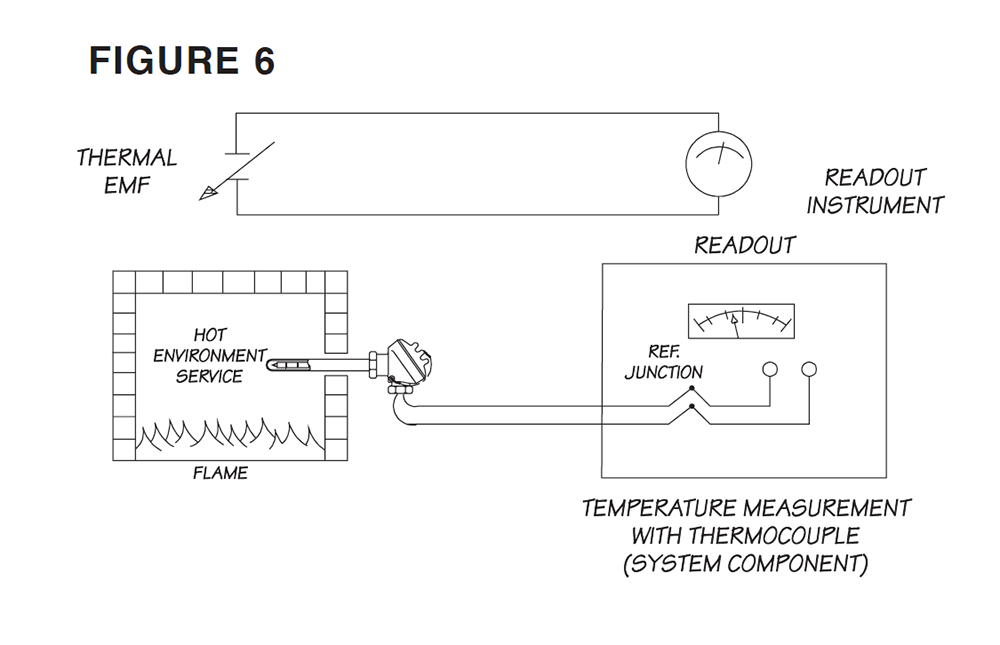 Temp-Pro is a leader in all types of thermocouple manufacturing for a wide range of industries and we welcome inquiries for customized temperature measurement solutions for both commercial and industrial applications.